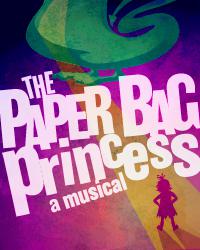 based on the book by ROBERT MUNSCH

As you may well know, Elizabeth and Ronald were the perfect couple. Elizabeth, a beautiful Princess and Ronald, a handsome Prince. End of story. Well that is until the Dragon soars in to heat things up. The Dragon wreaks havoc on their kingdom, leaving Elizabeth a smoldering mess, and Prince-less, as the Dragon took Ronald as a snack for later. Some might crumble and accept defeat, but not Elizabeth. She dusts off her charbroiled tiara and heads off on an epic journey to defeat the Dragon, and rescue her beloved Ronald. With help from friends along the way, clever wit, and a dose of quick thinking, this brave heroine saves the day, and Ronald. Although, with his attitude, she might just end up leaving him in the dungeon where he belongs!

Back by popular demand, based on "One of the Best Children's Books Ever Written" (New York Times), by Robert Munsch, StoryBook Theatre is thrilled to be able introduce this adventure to whole new audience! First published in 1980, written by famed Canadian author Robert Munsch, it is still one of the most popular children’s stories with over four million copies printed. At a time when gender stigma and stereotypes have become the forefront of conversations around the world, we are so excited to bring this story to life again. A young princess who utilizes resilience, resourcefulness, independence and compassion, this classic tale has become more than just a fun bedtime story. It is a poignant reminder of the ideals we want reflected in our society and championed by everyone!